The story of Samuel Clark Casban reflects the social and economic changes that were sweeping England in the mid- to late- 19th century.

His brother Reuben was mentioned in “Australia-bound” as first to use the Casben spelling of the name, and the father of Arthur Casben, who emigrated to Australia.

This diagram shows Reuben and Samuel are related to some of the other “Meldreth Casbons” I have discussed in earlier posts.

Like most of the early Meldreth Casbons, Samuel’s father William was listed as an “Agricultural Labourer” on census documents, meaning he did not own land, and worked for wages. In this 1861 census, you can see that 9-year old Samuel (“S Carsbon”) and his two older brothers John and Reuben had “Lab” – short for Labourer – listed as their occupations. Only 6-year old sister Martha was not working, and listed as “Scholar.” This was pretty typical for lower-class families in rural England at the time.

Detail from 1861 Census of England and Wales, Meldreth (Click on image to enlarge)

In the 1871 census, Samuel had an unusual job. He was listed as a “Coprolite digger.” Coprolite was a generic term for fossilized material that was high in phosphate content. Phosphate was used as a fertilizer. When it was learned that certain fossils contained high concentrations of phosphate, a short-lived boom occurred in those areas where the fossils could be found, including South Cambridgeshre, where Meldreth is located. The Meldreth Local History website has a good article  about this industry if you’re interested in learning more about it. 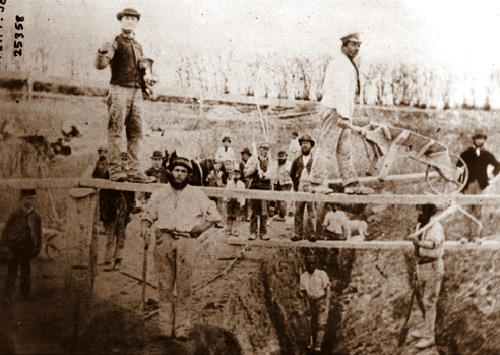 Whether he was financially better off or not, in 1872 he married Lydia Harrup of nearby Melbourne. [2] Lydia had her own experiences with child labor. In 1861 at the age of 8, she was employed in a worsted woolen mill in Yorkshire. [3]

Detail from 1861 Census of England and Wales, showing entry for Lydia Harrop (Click on image to enlarge)

Samuel and Lydia’s first two children, Anne (b. about 1873) and Samuel C (b. December 1873), were baptized in Melbourn. [4] Sometime between 1874 and 1880, they moved to Croydon, Surrey, then a suburb south of London (now part of London proper), where Samuel had a new job as a “Railway goods shunter.” [5] A shunter in railway employee who “couples and uncouples railway vehicles to enable them to be moved into position and marshalled (i.e. arranged in order) in a siding or railway yard.” [6]

Detail from 1881 Census of England and Wales, Croydon, Surrey (Click on image to enlarge)

By this time they had four children. In addition to Anne and Samuel C there were Alice (b. abt 1875 in Melbourne or Croydon) and William (born 1880 in Croydon). They would go on to have a total of 10 children. I’ve been able to locate records for 9 of them.

In 1891, Samuel’s occupation had changed again, now to a “Coal Porter,” i.e., one who carries heavy sacks of coal. [7],[8] In 1901 he was a “Contractor’s Carman at Asphalte Works.” [9] A carman was someone who “drove a vehicle used to transport goods” (in 1901 this would have meant a horse-drawn vehicle). [10] By 1911, he was listed as a “Crossing Sweeper.” [11] In earlier times this referred to a person who swept the street ahead of pedestrians as they crossed. “A job as a crossing sweeper was one step above being considered a beggar and the last chance for an individual to earn an ‘honest crust.’” [12] I haven’t been able to determine if this had a different meaning in 1911. At any rate, it is apparent that he was doing less physically intensive labor by 1911.

Samuel’s move from Meldreth to Croydon, and his changing occupations reflect the changing conditions in England in the latter half of the 19th and early 20th century. Industrialization and advances in transportation resulted in urban growth and new job opportunities. Nevertheless, Samuel never advanced beyond working class status, and it is unknown whether his financial stability or quality of life were improved as a result of these changes.

One other major event in the early twentieth century must have had a profound impact on Samuel and Lydia. They lost two of their sons in World War I. Earnest Charles Casbon was killed in the battlefields of France in 1914. [13] He had been married to Nellie Placket the year before and had a daughter Nellie born in 1914 (and died in 1915). [14],[15],[16] Leonard Casban died in a Turkish prisoner of war camp in 1917. [17]

Samuel and Lydia remained in Croydon the rest of their lives, as did many of their surviving children. Samuel died in 1922, and Lydia followed him in 1924. [18],[19]

Samuel is the patriarch of many of today’s Casbans in the United Kingdom (there are others from an apparently unrelated branch). Their numbers are relatively small, in part because they only had three surviving sons, and in part because those sons either remained childless or had a propensity for having daughters.

If any descendants of Samuel and Lydia are reading this, I hope you will contact me or leave a comment. There are many blanks to be filled in my information!

This site uses Akismet to reduce spam. Learn how your comment data is processed.